Actually, can't the information states overlap? What if, when Bob rolls a 1, Alice is told "1 or 3" and when Bob rolls a 2 is told "2 or 3" (with the rest of the situation remaining the same)? Then it seems like

Similarly in Geanakoplos's example on p. 261,[2] in his example the agent is conveniently told whether the number is even or odd, giving a partition. But what if the agent is told whether the number is 1-7 or 2-8? It seems like this information states setup restricts the examples we can formalize, and the examples people consider seem to conveniently be formalizable.

. So a rational agent can make their possible information states into a partition by reasoning about which clues are communicated. A general version of this is probably some basic theorem in game theory or a related field, but I am highly ignorant.

Actually, the above operation seems to be to "refine" the "partition" until it becomes an actual partition. The coarsest partition such that each element of the partition is a subset of the original set.

Given two partitions of a set, the join is the coarsest common refinement, and the meet is the finest common coarsening.

TODO [2] gives a definition by defining

"So this “common knowledge” condition is tantamount to mind melding" [2]. But I think:

In fact, [3] gives an example where directly exchanging the information leads to a different equilibrium than exchanging posteriors back and forth. So common knowledge and mind melding can't be the same thing.

TODO aumann assumes the join of the partitions consists of nonempty events. it would be good to show where in his proof this assumption is used.

warning: there are actually two conventions for what "meet" and "join" can mean. this happens because if you have two partitions

from order theory, we already have the convention that:

But what this doesn't tell you is what

should mean (or alternatively what

should mean), because order theory works with many different kinds of partial orders. Specifying any one of

"locks in" the meanings of the other two. so we need to do one of two things:

see more discussion about this here.

Clarifying what each agent knows

If I'm Alice with information partition

, then I can know

is, right? So we can build common knowledge and exchange posteriors without exchanging our exact information states.

In the idealized agreement theorem setup, the process for two agents, Alice and Bob, agreeing on posteriors of some event

What are the actual mechanics of observing the other's posterior and updating on it? I think what happens is that Bob gives Alice some set of omegas, and Alice gives Bob some other set of Omegas, and each intersects it with their current information set. And this resulting set becomes the new information set. Specifically suppose

. Then Bob gives Alice the set

. This way, Alice can carry out updates without knowing what

is or even what

is equivalent to knowing the set above, in which case Alice can receive

and compute the set on her own.

Another confusion I have: Aumann's theorem only seems to say when the theorem applies at (6). But it seems like what we want to know in addition is that steps (1)–(5) converge, so that we can apply the theorem. Without knowing about convergence, it would seem like the theorem just doesn't apply in many cases. Aumann's paper concludes with "Our result implies that the process of exchanging information on the posteriors for

in general? It seems like what we want is

. Is this okay? It seems like the convergence then happens in a single step? Maybe the examples I'm considering are too simple. Aumann's second coin toss example seems to have more than one exchange, so I should study that in detail. [4] uses the auxiliary sets

to track updates rather than changing the information partitions.

There is a paper called something like "we can't disagree forever", which might be similar to the above. Ok, I just checked the paper,[5] and it looks like this is exactly what the paper is about.

This example is given by Hal Finney in a LessWrong comment.[6]

Given the above description, what are the possible states of knowledge of Alice?

In the possible worlds notation, if we let

be Alice's information partition and

be Bob's information partition, we would write: 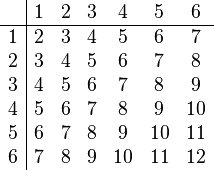 be an arbitrary event, and let

be constants. We now define the event

One of the assumptions in the agreement theorem is that

is common knowledge. This seems like a pretty strange requirement, since it seems like the posterior probability of

. For example, what if we bring in agent 3 and make the posteriors common knowledge again?

What if we take

and say that agent 1 knows

In the form of

above, we can change

to be any subset of

to be any numbers in

. We can also set the state of the world to be any

. The agreement theorem says that as we vary these parameters, if we ever find that

, then we must have

be a random variable defined by

is the sum of the values of the two dice.

Alice knows she rolled a 2 and Bob rolled something between 1 and 3. Now, consider that Alice is additionally told that Bob did not roll a 1. Now Alice's posterior probability of the event

is 1/2. How does this affect the agreement theorem? It seems like Alice's information partition changes; in particular, Bob's roll gets divided into

. Now for the event

is not a superset of

so the agreement theorem doesn't apply. And indeed, that's good because

This example is from Aumann's original paper.[1]

This example is from Aumann's original paper.[1]

things to read if i ever come back to this: